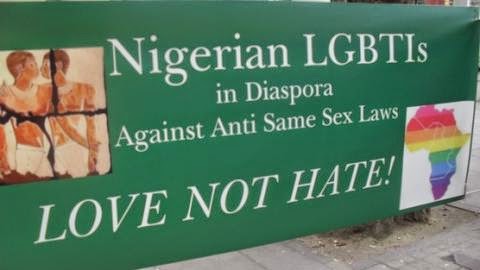 President Goodluck Jonathan signed a bill into law on Monday criminalising same-sex relationships, despite pressure from Western governments to respect LGBT rights. The law, which carries a maximum sentence of 14 years in prison if convicted, bans same-sex marriage and other “amorous relationships,” as well as LGBT organsations. Although it was passed by the country’s national assembly last May, Jonathan has delayed signing the bill until now.

While several European countries, most recently France, have moved to offer same-sex couples the same legal rights enjoyed by heterosexuals, many African countries are seeking to tighten laws against homosexuality. Britain and some other Western countries have threatened to cut aid, a threat that has helped hold back or scupper such legislation in aid-dependent nations like Uganda and Malawi. But they have little leverage over Nigeria, whose budget is funded by its 2-million-barrel-per-day oil output.

The news provoked an outpouring of anti-gay invective on Twitter :

What you take on this ? Are for or against ?? Here are posts from celebrities who are pour...

In France last year, about 7,000 same-sex couples tied the knot after gay marriage was legalised in May according to the French national statistics agency. France legalised same-sex marriage after months of intense and sometimes violent protests, in keeping with an election pledge by Socialist President François Hollande, who faced a huge backlash from the right and the powerful Catholic Church. France’s Insee statistics agency also said same-sex unions made up around three percent of all marriages registered in France in 2013.