Oh la la ! This picture of François Hollande is so embarrasing...

The French News Agency wants this photo of François Hollande, the president of France, deleted from the
internet...

Francois Hollande was caught on camera wearing a silly grin during a trip to a school in Denain, northern France, to mark the new term, Hollande was snapped by the AFP photographer, bearing a huge grin on his face, with big wide open eyes, as though he was pulling a funny face to make the pupils laugh. On a blackboard behind him is written: "Today, it's back to school" in French.

The photo, which isn’t becoming of a head of state, was originally posted on AFP’s website but the French news agency apparently realised too late that it did not befit a president and later issued a ‘mandatory kill’ notice, meaning the photo was not to be used.

AFP wrote: ‘Due to an editorial decision this photo has been withdrawn. Please remove from all your systems. We are sorry for any inconvenience and thank you for your cooperation.’


"Here is the new official photo of François Hollande. Please put up in all town halls!"

"No amount of Photoshop editing software can make the president look more intelligent".

Another, referring to plans to raise the state pension age, suggested Mr Hollande was thinking :

It's not the first time funny pictures of François Hollande flood the internet, i think the demand of the Agency  asking that the photo be withdrawn is what made it a buzz on the internet... 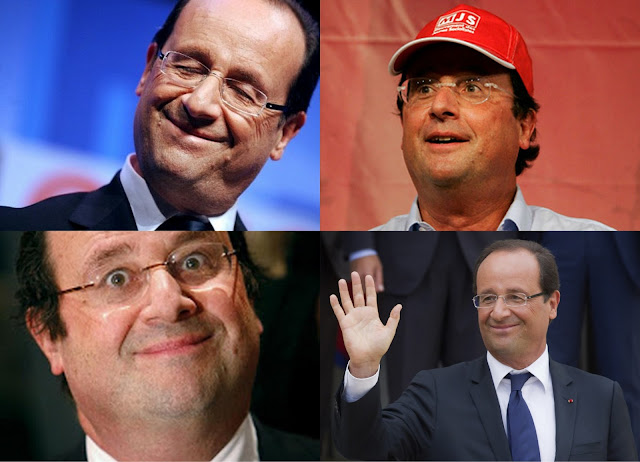 I also think that this picture is ridiculous. But it doesn't make him any less the president he is...

What do you guys think?