Will anyone stand up for you ? 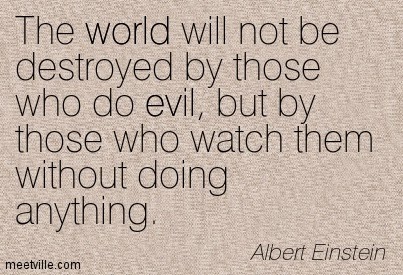 Below is a compilation of different videos from Cam Clash by France4.

Cam Clash is a tv program on France4 filmed by hidden cameras. Scenes are acted out by actors in different conflict situations such as harassment, discrimination or violence.

The goal is to view the reaction of witnesses, if they would interfere or not and how they would. This concept started in the US with "What Would you do".

On saturday, while at work, I saw three guys beating up a much younger guy, there were two other poeple there who didn't see what was going on, but I wonder if they would have done something if they had seen what was going on..

I screamed at the guys to stop and told them that I would call the cops and also reminded them that there were cameras everywhere recording the scene. They stopped hitting their victim and turned to me, threatening me. I told them they had better leave because I had called securitties already.  When they left I asked the young boy if he knew them, his friend was right there watching the scene but didn't say a word to the agressors as he was scared. The visibly shaken boy said he didn't know them, something I found strange because when I asked him if I should call the cops he said know. I let him leave since he was taking the opposite direction of where the guys took.

I called the boss and told her what happpened, she asked me to call the cops and tell them what happened since I was scared they might wait for me after work. I decided to do just that because the boss said so and also because I was scared deep down that I might pay for interfering by screaming at this people. A step I took to scare them away.

I called 17, the police line here. A French police man came on after about a minute. He didn't seemed interested (maybe because from my accent it's obvious I am not French). I even had to ask him once if he was still there because he was silent. He said "oui, je vous entend", the only words he said to me because immediately I finished, he just hanged up on me.

I got the shock of my life. I, who always admired the French police, and thought they were professionals. Even if my case wasn't urgent enough, did he have to hang up on me so impolitely?

This compilation is focused on racism, homophobia, domestic violence, harassment, amognst others. From this video, you'll realise that blacks are their brother's keepers and that fraternity still flows in our blood. I hope that we do not lose this aspect of us that's so unique.
Another scene here :
Scenes from "What Would you do" :
What do you think ?
Publié par Ayo DEFORGE à 14:46