Recycling in France is serious business.

France and several other european countries have introduced various recycling measures and facilities. Although not all French people bother to make use of them, the council does not hesistate to punish those that are guilty.

You are probably wondering how they'll know if you sorted out your trash or not ? Well, when your trash is collected and they notice you didn't do the sorting, the council will search your trash to look for any paper, enveloppe, document etc., that has your name and address. Then they'll send une amende to your house.

The city of Cagnes-sur-mer (where i live) picks up trash daily (except on wednesdays) and recycling once a week (every wednesdays). In apartment buildings, the gardien is responsible for taking the bins out to the street for pickup by the city crew. Your responsibility is to make sure that you separate trash from recycling and dispose of all your household waste properly. There also big recycling bins placed at diferent locations in the city, where you can dispose of materials for recycling.

Before I put any paper in the trash, i cut out my name and tear it into a million pieces, sometimes I soak it into water as a typical nigerian girl :) Anyways, I do screen my trash but who knows, I don't want to be punished the day I forget and put plastic in trash that cannot be recycled. I have three trash bins in the house, one for recyclable items, another for non-recyclable items and the last for items I have to dispose at reception centers. I leave bulk trash on the balcony until we are able to take it to the dechetteries. 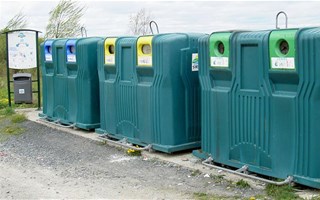 My friend Catherine once told me that her husband took the trash out, but the gardien had already taken it out of the building into the streets for collection, so he took the trash out as the city crew had not passed to pick up trash yet. The bin was filled, so he dropped the bag beside it. After some days, they got a fine for having dropped the trash bag on the street.

For bulk trash, the city has a site where they can be taken to for disposal, if you live in the city, you will get a pass to go into the site called déchetteries. The mairie also offers free curbside pick-up of bulky items such as furniture or electronics equipment once a month. This service is mostly used by old people who cannot take their bulk trash to the site.

Most of these bulky items are mostly in very good conditions, sofas, bed, matress, refrigerator, microwave, vacuum cleaner etc. Sometimes, i wish i can send them down in a container to Nigeria to people who can't afford to buy them in their homes...

Note that it is against the law to place oversized items on the curb without preauthorization.

At a recycling centre on the outskirts of the city, workers hand separate items before technology takes over: steel is removed with a magnet, and plastic and cans are kept together, while paper and card are shipped by barge to a plant in Rouen for pulping.

French officials claim that all the separate recycling processes are done within France. France has pioneered some recycling technologies so that until recently, the UK shipped some of its recyclable waste to be processed in France.

There are different kinds of waste bins, each for a different kind of waste. You'll notice that also there are images of what can be placed in each container. Each container is for a different material and color coded. In Paris, green bin is for glass (verre), yellow bin is for paper or cardboard (papier/cartonnette) and blue is for plastic or aluminum (plastique/aluminium or sometimes marked as emballage).

In Cagnes-sur-mer, green bins are for non-recyclable waste, while yellow is for recyclable materials such as  paper, plastic, and metal.

It is believed that recycling helps minimize waste reduce global warming which is the reasons behind the drastic changes in weather and climate. Scientists have discovered that rising carbon and greenhouse gas emissions result in extreme weather conditions such as Hurricane Sandy, and they are likely to occur more and more frequently. 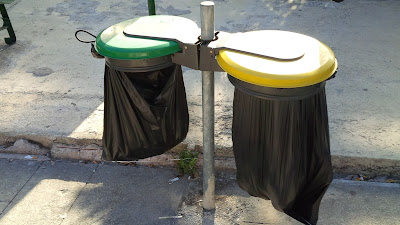 The greenhouse gas emissions released from landfills can be greatly reduced through waste diversion and recycling.

If Africa adopts this system and every African starts sorting out his trash, our continent will be well preserved for our children and children's children.

But I guess as usual, especially in Nigeria, most of our leaders are preoccupied with looting rather than bother their empty heads with issues which concerns protecting our environment.